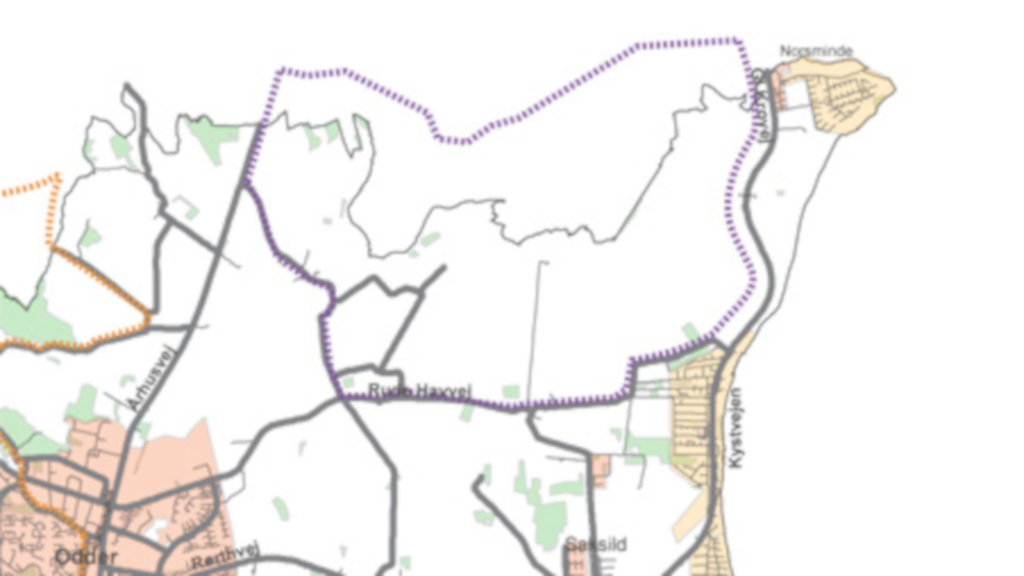 Bike route - 19 kilometres. This route circles around the inlet Norsminde Fjord. It passes through the lively and cosy Norsminde Marina and past Rude Beach. From Rude the path leads inland towards Odder and back to the coast through a hilly landscape. It leads past Ajstrup Beach on the way back to Norsminde. It is recommended that you grab a meal, an ice cream or cold refreshments at Norsminde Marina after the bike ride. At the camping site Saksild Strand Camping you can rent bicycles for a day.

1. Odder River Valley. The river between Nølev and Assedrup crosses the Odder River Valley. The meadows are often under water during wet period of the year. Here you will get a good impression of the long melt water valley, which was previously navigable water, as well as the reach of the river toward the Norsminde Fjord. The Odder-Århus railway runs along the valley to Assedrup whose typical, red railway station building is now a private residence.

2. Norsminde Fjord (Inlet). From the uplands at Synnedrup, Lillenor and Storenor you have a splendid view of the Norsminde Fjord with the Kattegat in the background. The 4 km long inlet forms the northern part of the glacial stream trench cutting through the countryside to the Horsens Fjord.

3. Norsminde Havn (Harbour). In 1964 the inlet was closed against the Kattegat by a sluice. Previously this was an important harbor belonging to the chapter of Århus. Ships calling at the harbor were charged a toll. Today the harbor is mainly used as a marina. Just next to the charming harbor the old inn of Norsminde Gl. Kro from 1693 is situated. This idyllic inn has been owned by the same family for many generations and a very exciting history is connected to it.

4. The Coast. To the south of Norsminde Fjord is the old Kysing Fjord. The size of the reclamation is almost half of the original inlet. The route back to Odder passes through the coastal land which is greatly influenced by the numerous summer houses used for holidays and leisure time activities. The citizens of Odder are also aware of the fresh sea air and the fine bathing beaches. In 1915 the first summer house was thus built at the rude Strand by a local merchant.

See the inlet tour on a map here