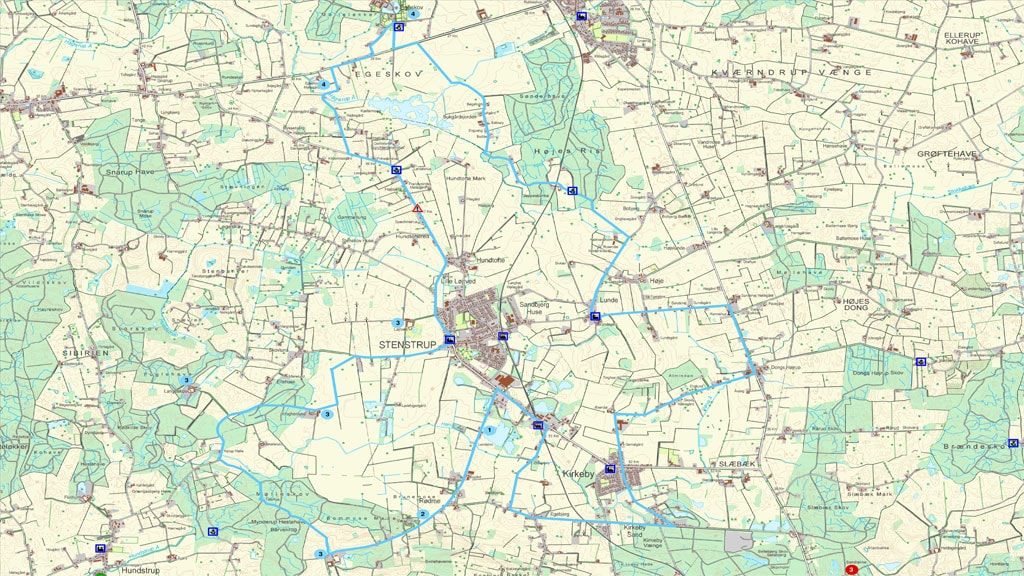 In the previous century, the treasure at the bottom of this huge lake was the bread and butter for local families. The south Funen country people earned a comfortable living although they had to work hard and did not have much spare time. You are biking back in time: more than 10,000 years, back to when the 35 sq km ice lake at Stenstrup was formed. When the ice melted away, it left a 10 m deep layer of clay. Clay forms into bricks and so thousands of bricks were produced and used for building and construction.

For many years the fl at plain you see on your bike trip was perceived as – well, a flat plain. Of course, that was what met the eye, so that was the conventional wisdom for many years. It is at least 10,000 years ago that there was any water here at Stenstrup ice lake but once the lake had drained away, the treasure appeared: the thick clay bedrock. In the 1800s numerous brickworks grew out of the landscape. Tall chimneys from the brickyard kilns were competing to landmark the horizon. These chimneys meant jobs, and jobs meant bread and butter. In places, workers extracted clay so deep into the pits that the ground water table started to trickle through. Little by little, as the clay was quarried away and transformed into bricks, the areas south of Stenstrup again saw the formation of lakes that attract a variety of water birds. The birds reside here all year round so do not forget to bring your field glasses.

If you get off your bike at Rødmevej for a breather, you will have a good view of the ice lake. Today, this area is flat as a pancake. However, you should try to imagine the expanse of the lake, more than 25 metres deep at the time. Look to your right and find the Stenstrup church tower. Think about it: this was the water level of the lake back then.

The land with its treasure was the property of large landowners and they prospered. That is why this trail takes you closely past the three manor houses of Skjoldemose, Kroghenlund and Løjtved. You can enjoy the splendid architecture and the many kilometres of hundred-year-old dry-stone hedges. These stone fences are useful for many purposes; park your bike against them while picnicking or enjoying a restful moment. Then pedal down the long manor-house avenues and let your mind wander.

The fifth manor house you will pass on your way is the famous Egeskov Slot (Oak Wood Castle), which rises from its foundation of oak piles in the middle of a lake. The story goes that an entire oak wood was cut down to provide the oak logs required to complete the castle more than 550 years ago. Today the castle, the award-winning park and the many museums are open to the public. You may well lose your way in the man-made maze or feel like Tarzan and Jane on the suspension paths among the treetops before mounting the old bike again. It is only a short way before you reach Egeskov Mølle, which until 1926 would mill the grain from the manor estate. Today the mill is the property of Svendborg Museum and Egeskov Millers Guild are in charge of milling operations. When the flag is flying, the mill is open to the public and you may be lucky enough to see the grain being ground.