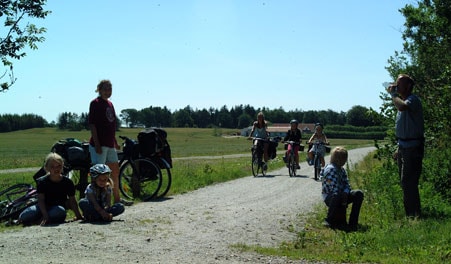 The Limfiord coast
The trip along the west coast of Himmerland takes you through a very varied coastal landscape. In the north Denmark’s subsurface from before the Ice Age is uncovered by Aggersund. The 25 meter high coastal cliff between Aggersund and Løgstør is made of white chalk that is 70 million years old. On the cliff you can find rare chalk cliff plants.

Vitskøl Monastery is a beautiful example of the powerful monasteries that were constructed throughout Denmark in the 12th Century.
In 1158 King Valdemar the Great granted the Cistercian monks the land and estate as a thanks to God for his recent victory at Grathe Heath. While building the monastery the monks also started building what was meant to be Denmark’s largest church.
It was never completed according to the plan, but the ruins found in the park to the north of the current buildings will give you a sense of how large the church was meant to be.
After the Reformation the church fell into disrepair and was torn down. The current buildings include parts of the monks Middle Age buildings, but are predominately influenced by the secular building style of the 17th and 18th Centuries.

From Lendrup Beach to Lørgstør the route follows Frederik the 7th Canal which is among the longest canals in Denmark. The canal was constructed between 1856 and 1861 in order to lead shipping around Løgstør shoals which had previously caused all shipments to be transshipped to flat-bottomed barges.
Around the year 1900 Løgstør Shoals were dug out and the canal lost its significance. The area is preserved and in the old Canal Officer’s buildings you find a museum about the canal and fiord
Adresse