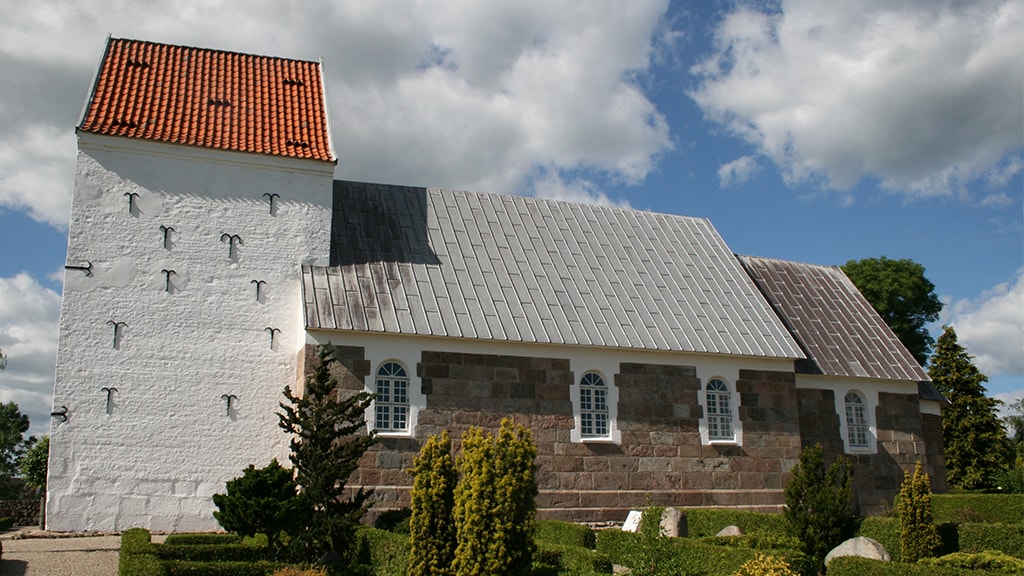 Læborg Church is situated on a hillside on the southern outskirts of the village of Læborg right next to the Ancient Road. The church was originally located in open land and was used as a landmark by travellers on the Ancient Road, and according to history books also by seafarers in the North Sea.

Læborg Church is a Romanesque ashlar stone building with semi-circular apse, square chancel and nave and with a tower that was added in the late Middle Ages. The tower was originally higher, reaching 17.5 meters, but after it collapsed in 1818, it was rebuilt to the height of 13 meters. The north side of the nave is well preserved. The clergyman’s door in the southern side has been blocked using ashlar masonry. The cemetery, which is almost square in shape and framed by stonewalls, houses the large Læborg rune stone, which has been relocated to the cemetery from where it was originally found. At the cemetery’s southwest corner there was once a sacred spring, which has now dried up due to drainage. Note that the cemetery also has a memorial to a drowning in the stream next to the church, a memorial made by Niels Hansen Jacobsen from Vejen.

According to legend, the timber used to build Læborg Church comes from the forest by Hundsbæk. The legend says that this forest was burnt to evict a serpent, which nonetheless encircled the church until the good people of the town finally managed to slay it.