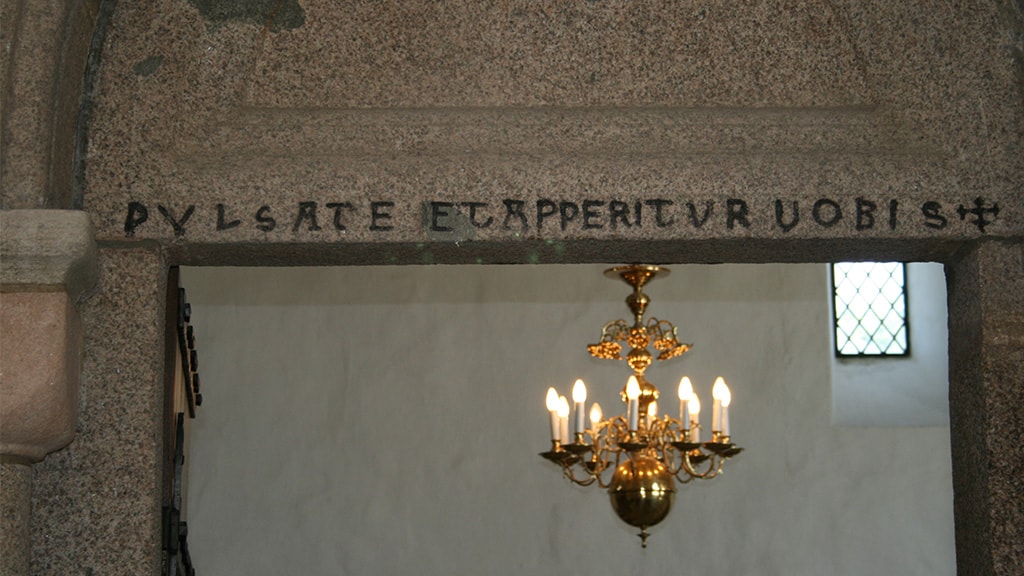 Malt Church is located on a hilltop in the parish of Malt. Although the village has expanded around the church, it has retained its open view of the surrounding landscape to the south. The church’s baptismal font is especially remarkable.

Malt Church was ransacked during the Dano-Swedish wars in 1657-60. Both the church and the area suffered under the invasion of Polish mercenaries, such as at Skudstrup south of the river of Kongeåen. The mercenaries also brought the plague to the area. Church services could not be held for a period after the war and the nobleman who owned the church at the time also failed to provide funds for repairs. Malt Church has for periods in history belonged to the manor of Estrup.

The church building
The church is a Romanesque ashlar stone building with chancel and nave from the 1100s. Shortly after the consecration of the church, a tower was added. The porch on the south side of the nave is from the late Middle Ages. Most of the whitewashed walls are assumed to be original, and several ashlar stones used in the construction have been hewn from a single block of granite, so-called sister stones. This is seen with the third layer of masonry in the chancellery and at the southern entrance to the nave. Elongated ashlar stones were used here. The slate roof was fully refurbished in 2014.

The southern door of the nave, i.e. the entrance from the porch, is a two-column portal similar to that at Føvling Church (both inspired by Ribe Cathedral). The portal lintel bears an inscription in Latin, which in translation means: “Knock and there shall be opened unto you.” Undeniably a sharp example of good communication, both literally and figuratively.

Malt Church fixtures
The whitewashed nave contains furnishings from throughout the history of the church. The baptismal font of granite with its bas-reliefs depicts the struggle between good and evil and dates back to the consecration of the church. The font is considered a masterpiece among the baptismal fonts of Jutland due to its artistic quality and craftsmanship. The altarpiece is from 1588 and is crafted in the early Renaissance style with Gothic features. The woodcarvings are by Mads Christensen Gamst with paintings in the main panels from 1927 by Troels Trier. The paintings depict Christ and the Supper at Emmaus and are rendered with inspiration from Rembrandt. The altar cloth was crafted by local textile artist Ingrid Fogh, Askov. The pulpit was erected in 1588 and is adorned with ornamentation. Remains of a golden altar from around the 1200s were found in the church, which indicates looting.

Glass has been found in the chancel from a very old stained glass window. In 1985, a glass mosaic was added with an ivy motif designed by Sven Havsteen-Mikkelsen.

Cemetery
Malt Church cemetery has retained its old boundaries and is still fenced using the old fieldstone embankments. East of the chancel is a very large and characteristic red beech tree. A former belfry collapsed during the evening ringing on 5 September 1878, which cost the bell ringer Peter Iversen his life. Northeast of the cemetery there was once a holy spring.

Archaeologically, the holes from the scaffolding from when the church was first constructed were found in 1958. There had been scaffolding both inside and outside the church, so excavations at the church have provided new information about the technology used when constructing the Romanesque churches.