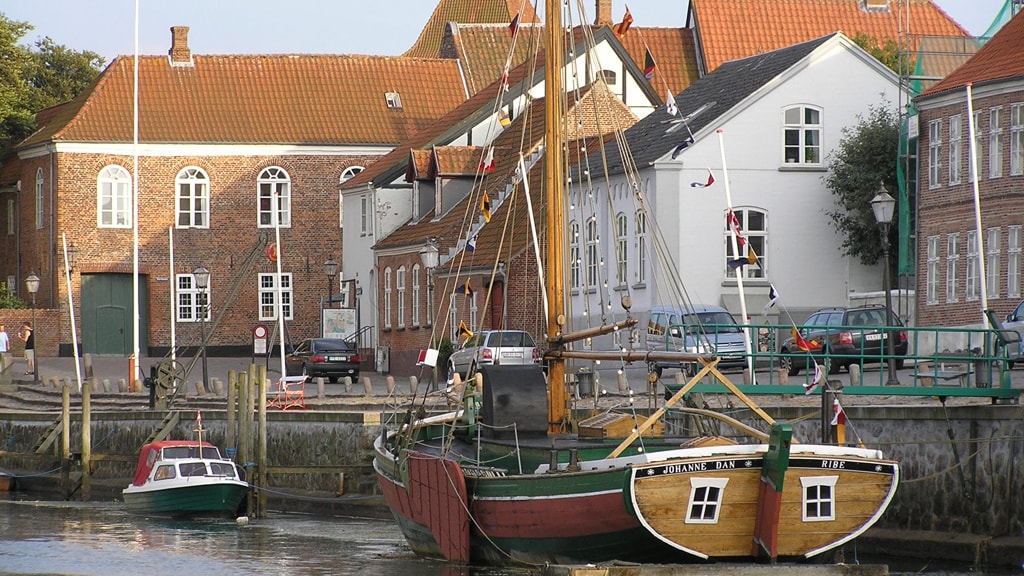 From the Viking Age and up to around the 17th century, the port of Ribe was one of the most important ports on the west coast, where shipments of agricultural goods and imports of wine, salt, silk and spices took place.

Today, it is difficult to appreciate that during the Middle Ages and the Renaissance Ribe was of one of Denmark’s most important harbour towns. Transport of goods before there were roads and railways was easiest and cheapest by sea. When people wanted to transport goods by ship to and from the old Western Europe, one of the few possibilities for leeward shelter and a landing stage along the Jutlandic West coast was getting to the Wadden Sea, where it was possible to fi nd cover for the wind and the weather behind the Wadden Sea Islands. From here, a ship could continue the journey in comfort by sailing up the winding river to Ribe. Although, with time, the ships sailing the river became so large that they could no longer use the river, the Wadden Sea remained an especially attractive anchorage point for skippers of that period.

The Wadden Sea is precisely where we fi nd the fi ve conditions that during the time of the sailing ships characterized a “good harbour” or, what we today would call a roadstead or an anchorage point. Here, the ships found shelter from the sea and the wind; in the tidal channels between the islands the depth of water was just right and provided a good holding point for an anchor. As well, the space between the channels made it possible for a ship to swing at anchor and, moreover, it was possible to sail to and from the anchorage points situated behind the island in just about all wind directions. In addition, the in and outfl owing tide also helped on the trip between the North Sea and the Wadden Sea.

The ships would anchor in Knudedyb behind either Fanø or Mandø or on Skøgum Banke, situated a couple of miles further towards Ribe. From these anchoring points, the fl at-bottomed boats everter (a type of Evert-Galease) and barges, sailed back and forth between the ships at anchor in the Wadden Sea and Skibbroen in Ribe. The fl at-bottomed Evert-Galease was also used in connection with the local transport of goods throughout the Wadden Sea area. With its low draught and flat bottom, it could sail all the way to the shore at the high tide; stay dry on the seabed during the low tide while re-loading, and then sail away on the next high tide. A copy of one of the last such boats can be seen moored at Skibbroen in Ribe Harbour.

Ribe Sejlklub has port facilities at both Kammerslusen and inside Ribe, the sailing club is part of the Freeport Scheme, so there is the possibility of free stay according to agreement.