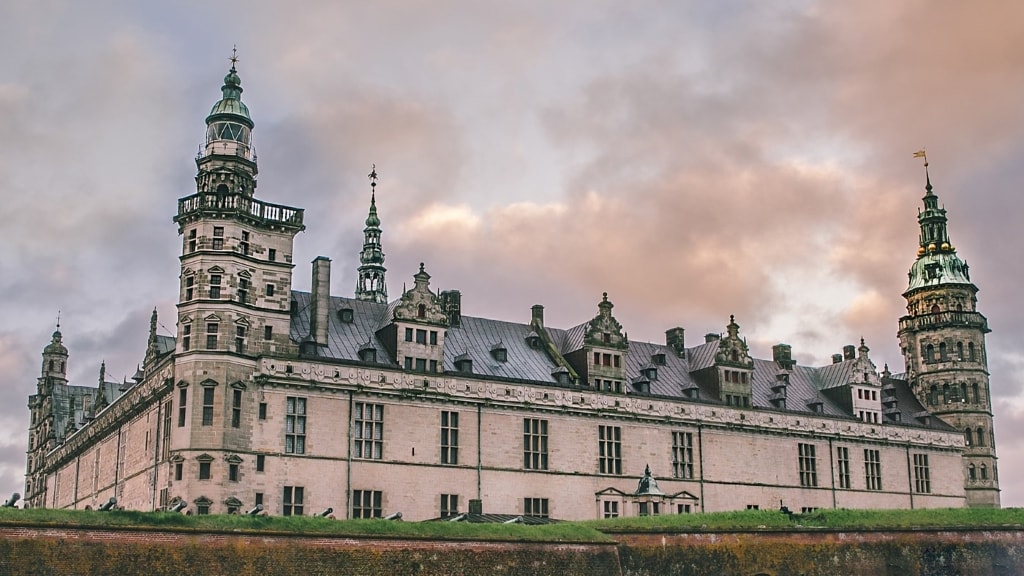 Kronborg is one of Northern Europe’s finest Renaissance castles. It is world-famous as Hamlet’s and Shakespeare’s castle and is included on the UNESCO World Heritage List.

In Elsinore, right where the distance between Denmark and Sweden is the shortest, you find Kronborg Castle facing the Sound and surrounded by a magnificent fortification with bastions and cannon batteries. The castle’s history is fascinating and definitely worth a visit. Here, you can see Frederik II’s sumptuous ballroom, enjoy the magnificent tapestries and say hello to Holger the Dane in the  casemates deep below the castle. Only a few places in the world are surrounded with so much drama and history as Kronborg Castle.

The guardian of Oresund

The history of Kronborg Castle goes all the way back to 1420 where Eric of Pomerania built Krogen, a fortress which was to control the entrance to Oresund and collect the lucrative Sound Dues from the passing ships. The Sound Dues played an important role to Elsinore for more than 400 years. The money went to the King, however, the trade in connection with the Sound Dues made the town wealthy and famous all over the world.

In the period 1574-1585, Frederik II built the sumptuous renaissance castle, Kronborg Castle, as a strong symbol of wealth and power. The Sound Dues financed the towers and steeples, copper roofs and sandstone ornaments. In the great period of Kronborg Castle in the late 16th century, sailors, businessmen, diplomats and aristocrats spoke of the magnificent castle and court in Elsinore with its pomp and splendour.

Shakespeare used Kronborg when he wrote his immortal play about the king's son Hamlet and today, in the rest of the world, the castle is better known as Hamlet’s Castle. No one knows for sure whether Shakespeare ever visited Kronborg Castle, but he certainly heard the rumours of the decadent lifestyle of the court. It was documented that British player groups visited Kronborg several times during Shakespeare's time.

Kronborg Castle was ravaged by a devastating fire in 1629 which only left the chapel intact. Christian IV reconstructed the castle with extensive new Baroque decorations, however, in 1658 another accident hit Kronborg when the Swedes bombarded and occupied and took many precious art treasures as booty.

From royal resident to military deployment

Since then it went downhill. Kronborg was fortified as a fortress with Kroneværket by Christian V in 1690, but since then the castle has virtually not been inhabited by royals. From 1785 until 1923, the castle was used by the military and not until then it was thoroughly restored and returned to the greatness of Frederik II and Christian IV.

UNESCO has inscribed a number of monuments, buildings, cultural landscapes and nature areas as world heritage because they hold an exceptional value to humanity and need to be protected. One of them was Kronborg Castle which was entered on UNESCO’s  World Heritage List in 2000. Several Danish attractions are registered at UNESCO’s World Heritage, e.g. the Par Force Hunting Landscape in North Sealand.

Events in and around Kronborg

After your visit at Kronborg Castle, you could: