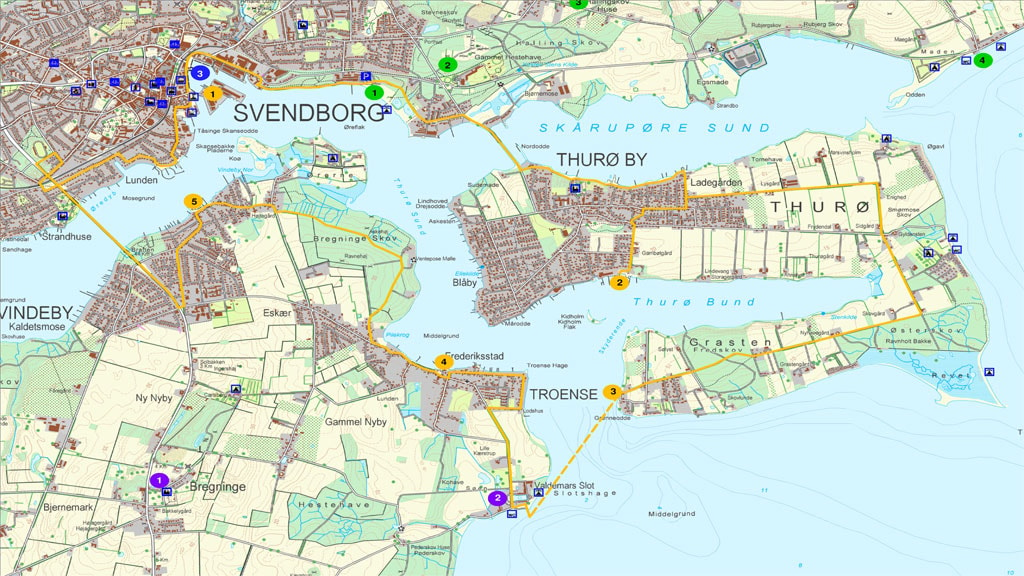 Seafarers from the South of Funen stood strong

This trip departs from the harbour of the old trade and shipping town of Svendborg and criss-crosses the Sound on bike and at sea with the vintage M/S Helge. The maritime history of the Sound of Svendborg is a narrative of shipbuilders and mariners whose livelihoods were on and by the sea. The mariners from the South of Funen navigated through wars and times of crisis and brought their cargoes of fruit, fish, timber and other daily conveniences into the corners of the world at all times. They built their own ships, and in the eighteenand nineteen hundreds there were 29 shipyards in the Svendborg, Tåsinge and Thurø area. Today’s maritime traffi c on the Sound consists mainly of yachts and other pleasure craft and this atmosphere is further emphasized by the Danish Dinghy and Pleasure Craft Museum at Valdemars Slot.

The trading post at Lundeborg is the oldest of its kind in Denmark. Actually, during the Roman Iron Age from 100 to 400 AD it was among the biggest in Northern Europe. Quite recently, in 1986, it saw the light of day again. When rolling past it, think of the fact that in this place the locals welcomed tradesmen from distant destinations such as Rome and the Black Sea. These traders brought luxury items such as drinking glasses, gold coins and silver and gold jewelry. Today, local people revive this past by staging an Iron Age market every summer at the old trading post.

The Broholm Treasure weighs just about the same as 4½ litres of milk. The 4½ kg gold treasure was found at Lundeborg in 1833 and is on display at the Danish National Museum in Copenhagen. Lord of the Manor, and a keen amateur archaeologist, N.F.B. Sehested witnessed the gold find, which was to be the second largest next to the fi nd of ‘the Golden Horns’. At the Broholm manor he built a little museum for the display of some of the other treasures that appeared out of the rich soil. For more information on the museum, please refer to the ”Practical information” section.

Make a little side trip to Møllegårdsmarken, which is Scandinavia’s largest burial place dating from the Roman Iron Age. People from the Gudme and Lundeborg area were buried here, often with precious grave goods. Digs by Lord of the Manor N.F.B. Sehested and other archaeologists show that about 2,200 people found their last resting place here. But even before this time burials took place in this area. Park your bike and walk a mile or two through the wood and along Tange Å and you will arrive at two 5,000 years’ old burial chambers – passage graves.

Take a break and count the 52 rocks on the outside and the 45 rocks on the inside. Now you know the 60 m long dolmen at Brudager. The history of this long barrow is the history of several burial chambers built in mthe Late Stone Age more than 5,000 years ago. In recent times it is also the history of a quarry that provided stones for house and road building. In the evocative wood and memorial grove of Gudbjerglund at Gudbjerg you can see the remains of four long barrows, the longest of which is all of 117 m. For several thousand years the long barrows have served as burial places and later on as building materials for the local vicarage and for the bridges crossing the streams.

In 1993, GOG, the local handball club had to look around for a new place to build their sports hall as the planned site suddenly burst with archaeological fi nds from the Iron Age. No other place in Scandinavia can boast finds from this period on a par with those from the Gudme area, and in the years 400-550 AD Gudme was the most important centre of power in Denmark. The area was named the Valley of the Gudme King and markers have been laid out in the ground so that you may see the contours of the 50 m long and 9.5 m wide mead hall if you leave your bike and climb the stairs of the on-site public viewing tower.