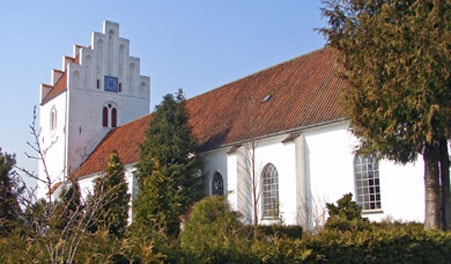 The church is very long as it was extended three times, about 1400, 1530 and 1600. It has a very interesting crucifix from 1300 with the cross shaped as a tree of life (from 1150). There is a parish clerk's seat from 1575. The carved pulpit is of High Renaissance style from the Schrøder workshop in Næstved.

On 28th June 2002 the stone on the common grave was unveiled. It is 1½ m high and weighs 5-6 tons. It comes from Præstemarken and has been waiting 20 years for its mission. The church received a legacy, part of which was used for decoration of the stone. (The donor was born on 28th June, which is why the stone was unveiled on that date).The motive of the stone is a copy of the picture of the baptism basin of the church. It depicts a deer - a symbol of death and eternal life.