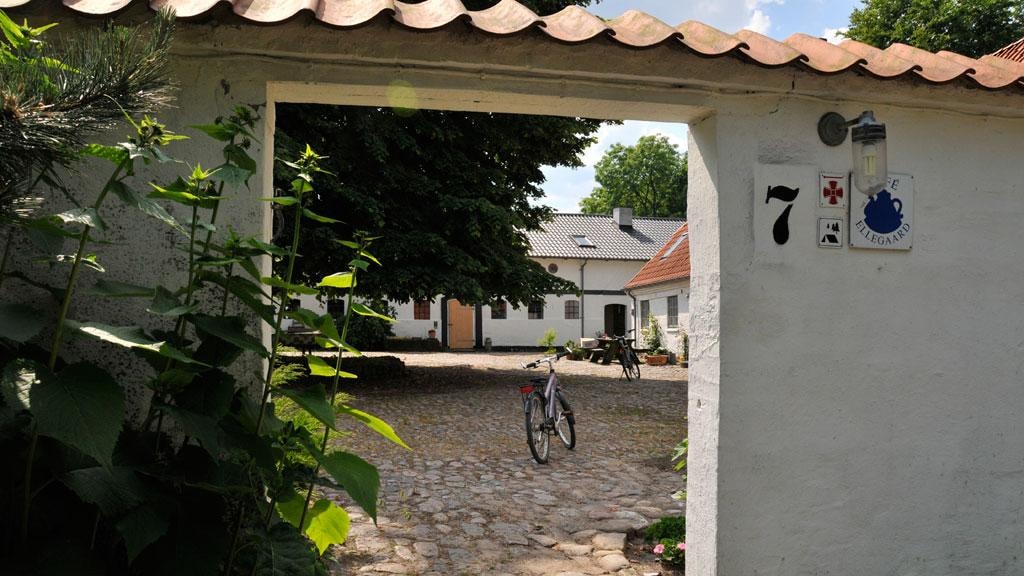 Lace up your hiking boots or jump on the bike and follow The Ancient Road on the legs between Jels and Rødekro, which passes through Haderslev municipality and ACTURE PARK.

The road from Jels goes through some beautiful scenery, before it reaches Vojens. This stage is well suited for those with children, as Vojens - which lies in the heart of ACTURE PARK -  has lots of entertaining things to do for the whole family.

From Jels, the bicycle route follows woodland trails through Stursbøl Plantation. As the woods are on the top of the ridge, with few streams to cross, it is likely that this route has been used by travellers for thousands of years. The link to ancient times can clearly be seen by the 70 Bronze Age grave mounds which lie close to the Hærvej track. South of the woodland lies the old Hærvej inn in Stursbøl, which is today known as Café Ellegård.

Afterwards, the route leads around the edges of Oksenvad Heath, and down to Slevad Bridge. There are clear tracks, showing that the crossing at Slevad and Oksenvad has been used for many years.

There is a signpost towards an Iron Age grave mound, which has been excavated and opened to the public, so visitors can see the double stone ring construction.

Vojens has plenty of opportunities for shopping and lots of action-packed activities. The town is known amongst other things for its speedway track, built by Ole Olsen, Denmark’s first speedway world champion. Vojens also has Denmark's largest outdoor go-kart track, and a skating rink, sports hall, swimming pool and leisure centre. In other words, there are plenty of fun things to do in Vojens before continuing along the Hærvej. Tørning Mill is located slightly south from Vojens and is a scenic area, perfect for a break. Explore the old water mill and feel the breath of history when you stand on the mount, which was previously the site of Denmark's largest medieval castle.

If you go a little southwest, you can find Denmark’s second oldest Bronze Age site, which was found during an excavation in 1993. The house may have been the home of the Skrydstrup girl. Southwest of Vojens, towards Over Jerstal is the grave mound where the Skrydstrup girl was found in 1935.

The grave contained the body of a girl of about 19 years of age, who was buried during the early Bronze Age, around 1300 BC. The find is exhibited in the National Museum in Copenhagen, but Haderslev Museum has a replica of the Skrydstrup girl’s clothes.

There are a number of cultural treasures on the stretch of the Hærvej between Vojens and Rødekro. You will cross the first of the Hærvej’s characteristic bridges, Immervad Bro. On your journey, you can also see the Hærulf Stone and a little south of Hovslund Stationsby, there is the old Damgård Mill from 1867.

The grave mounds around Vedsted Lakes

A few kilometers south of the Skrydstrup girl’s grave mound, following the main road between Vojens and Over Jerstal, there is a group of grave mounds slightly west of the road, which are open to the public. The mounds originate from the middle Bronze Age, around 3000 BC. On your return from the grave mounds to the bicycle route, you can see a number of very well preserved graves around the lakes at Vedsted, amongst others one northeast of Vedsted Church.
Fresh provisions can be bought in Vedsted for the journey, or you take the path around Vedsted Lake, where in the southeast end, there is a swimming and recreational area.

The next stage south to Hovlund Stationsby, has a lot of attractions worth stopping and seeing, within a short distance from each other.

The Long Barrows at Holmshus

Holmshus is located not far south of Vedsted, and is home to one of Jutland’s most impressive Stone Age graves, the Long Barrows. They consist amongst others, of two parallel barrows, each over 100 m long. There is access to the large passage grave - remember to bring a torch. Above, the main chamber is covered by a 7 ton solid stone, which must have been an extraordinary construction achievement when it was built around 3200 BC.

The Hærvej route continues along the edge of the peat bog conservation area in Abkær Mose and Stengelmose. Near the main road between the marshes, about 0,5 km west of the bicycle route is a bird watching tower, which has an excellent view over the whole area.

Afterwards, the journey continues towards the Immervad River, which runs westward, where it runs into Gels River, which in turn becomes Ribe River. You can see the characteristic Immervad Bridge, which was the main crossing point since 1776.

The bridge is built of cut stone, and was presumably originally wooden, although the name Immervad suggests that this was a crossing before the bridges were built. Fords and bridges have always been meeting places for travellers, and this is no exception. Immervad Kro was once well known for its peas and bacon, but has since closed, although the rest stop remains and today you will also find a modern farm with a hostel.

Immediately outside Hovslund Stationsby is a remarkable rune stone at the side of the road. The inscription is not long - only the name Hærulf or “Hairulfr” as it was written in the 900’s. The stone was moved to Berlin as spoils of war in 1864 and was first returned in 1952, where it now stands in its original place.

In the same location, slightly east of the road is a Bronze Age mound - Strangelshøj, with a 2 m high standing stone close by. A legend says that the stone turns around when it smells bread! There is access to the mound and stone from the rest stop on the road.

Further along, the route passes through Øster Løgum, where a few kilometers south of which is a fortification dating back to the late 200’s, the Vendersvold. The site was originally around 3 km long, of which 500 m can still be seen today. From the Hærvej, there is access from the rest stop on Andholmvej. 1700 years after the fortification was finished, a second defensive system was built on the same site. On the western side, there is a well preserved cannon battery, the Andholm battery.

The Hærvej goes straight past the old inn in Rødekro and on through the main road in the town. Normally inns are named after the town where they are located, but Rødekro is an exception as the town inherited its name from the inn in 1642. There are good shopping facilities in Rødekro.

Slightly south of Rødekro near Rise Church is a way marker from the time of Christian VII, with the inscription “Weg nach Flensburg und Sleswich”. The romantic period church with distinctive wall studs in the tower, contains well preserved inventory from the Middle Ages.

REMEMBER to download the app "Hærvejen", which gives you a detailed map of the route and tells you where you can find places to eat and sleep as well as sights and experiences along the way!