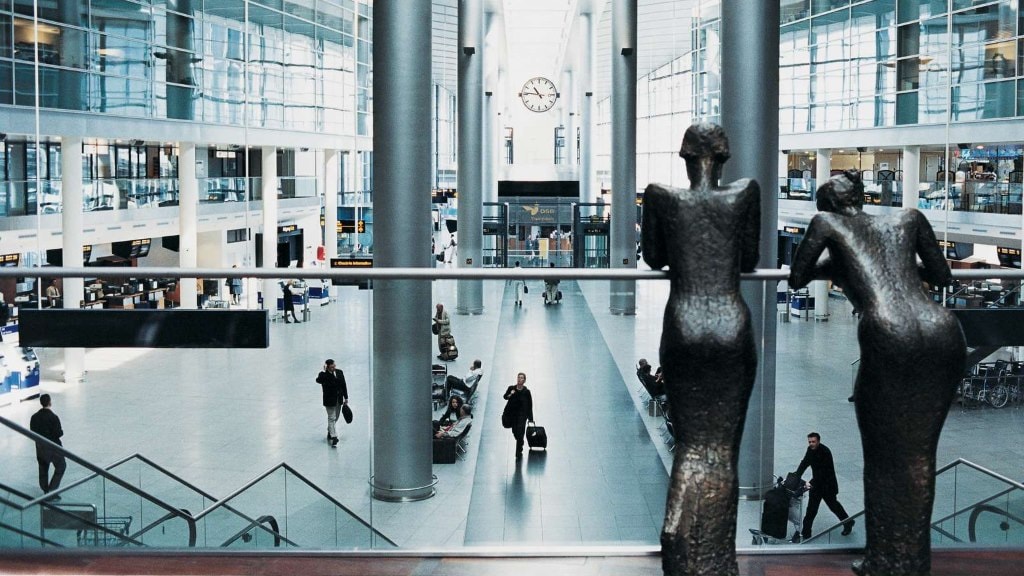 Copenhagen Airport is situated only eight kilometers outside of Copenhagen city centre.

With 60,000 passengers a day it is the busiest airport in Scandinavia. At the airport you have plenty of opportunities for tax free shopping and dinner and drinks before or after your flight.

The airport contains three terminals, who are all connected. Terminal 1 is for domestic flights. Terminal 2 and 3 are for international lights and routes to Greenland and the Faroe Islands. All international arrivals are at Terminal 3.

Transport to and from the airport

Trains from Copenhagen Central Station and the airport departs every ten minutes, and the journey is about 20 minutes. The easiest way to get to and from the airport is by Metro.

The Metro runs around the clock, and stops at Kongens Nytorv, Nørreport, Frederiksberg and Vanløse. A bus ride is as cheap as the train and Metro, but the ride is a lot longer. A ride with either train, bus or Metro equals three zones and costs DKK 38.

A cab ride is the most expensive way to get to and from the airport. To Copenhagen city centre it will cost around DKK 250 and 350. Taxi stands are located just outside terminal 3.

The Greyhound Bus line 999 runs from Malmo to Copenhagen and stops at Copenhagen Airport, Kastrup (by Terminal 3), Sydhavnen (the South Harbour), on Kongens Nytorv by the Royal Theatre, Nørreport and the Town Hall Square.

Bus terminal at the airport

The bus stops close to Copenhagen in Holbæk and Roskilde.

With a Copenhagen Card in hand you don’t have to worry about zones and ticket prices, as you get unlimited transportation in the entire Capital Region (including to/from Copenhagen Airport). In addition, you get free admission to more than 80 attractions and museums as well as discounts on several restaurants, cafés, sightseeing activities etc. The Copenhagen Card is valid for 24, 48, 72 or 120 hours.

You can easily preorder your Copenhagen Card online and pick it up upon arrival in Copenhagen Airport and start using it right away on e.g. the Metro to the city center.