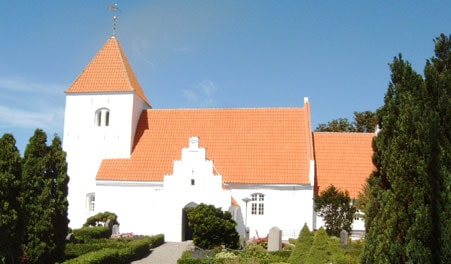 Femø Church was built about the year of 1500. It is situated high in the hilly country, so it is possible to see the church from the harbour. The church was consecrated for the patron saint called Sankt Nikolaus, the patron saint of the mariners.

Among the furniture of the church the crucifix above the altar occurs as the most remarkable part of it. Originally it was Gothic, and it is dated from about the year of 1300. It was placed in the church in the year of 1939.

The former altarpiece is standing in the steeple room.

The font is a piece of Gothic limestone creation with tip curved sepals, which are fetched from Gotland. There are a birth basin made of brass in the year of 1859 and a birth pitcher made of tin, which was purchased in the year of 1862.

The pulpit is made in the Renaissance style from about the year of 1580. It is placed on a twisted column. In the fillings there are different kinds of leaf ornaments and figures. An inscription tells: “Those, who have ears to listen with, are actually hearing “– a quotation from the Gospel according to St. Matthew.SS