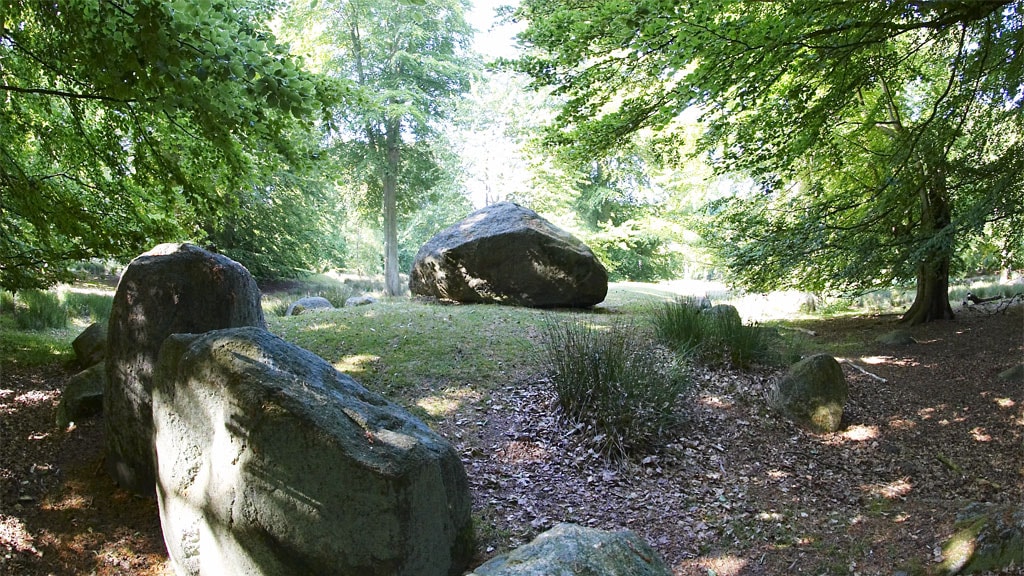 Exploring an ancient cultural landscape
Why are there so many dolmens and mounds in Halskov Vænge?
No one can resist wondering how such a small forest of barely 29 hectares contains 6 dolmens and 72 burial mounds. However, there is actually nothing to suggest that they have been placed closer together here than at so many other sites. The difference is that here in the woods the mounds have been preserved, while many of the ones on open land have been demolished.

The Bronze Age
All indications suggest that the site was inhabited throughout the Bronze Age. Indeed, the first reliable map of the district shows that in 1838 there were still more than a dozen large burial mounds in the fields outside the woods. Of these, only 2 remain today: large mounds with oak-coffin graves from the late Bronze Age.

Post-Glacial Age
Towards the end of prehistoric times the woods were allowed to spread out over the fields. Possibly, because it was becoming too dangerous to live so close to the coast. The Danish Census Book of 1250 clearly shows that there was not a single village anywhere along the coast of Falster. A line of forest stretching 5 km along the East coast provided some defence against attack from the seaward side. It was dangerous to penetrate the woods, where the people of Falster were on their home terrain.

Forest towns
ln the 14th and 15th centuries the need for arable land was stronger than the fear of pirates. Consequently, a number of new villages sprang up: Halskov, Skjoldtrup and Bønnet in clearings within the coastal forest. At first, this cultivation avoided demolishing dolmens and large burial mounds. It was easier and safer to plough around the huge mounds, in which they believed underground spirits resided.