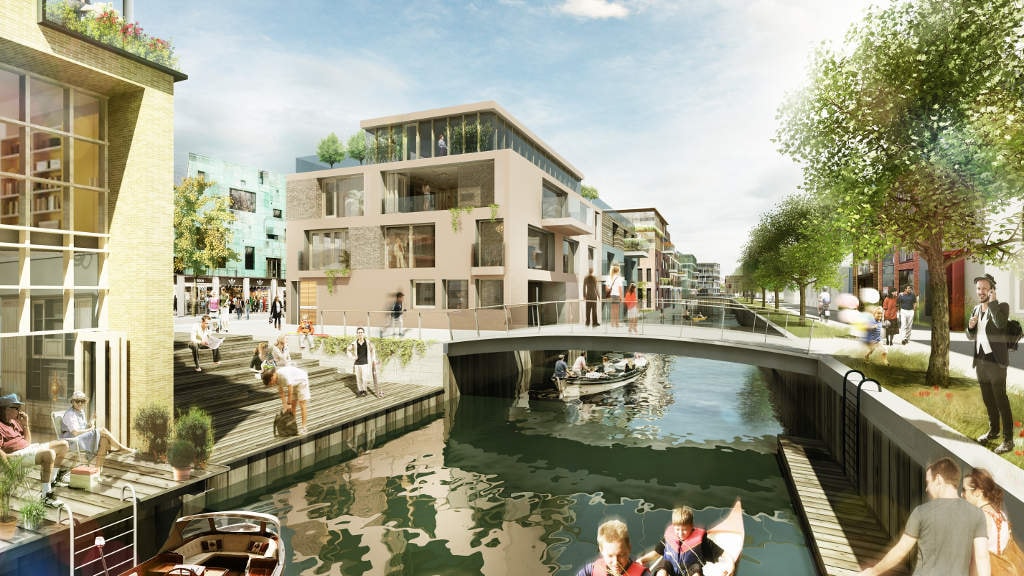 Kanalbyen - the canal district of Fredericia

A large area at the harbour front in Fredericia is being developed into a new attractive neighbourhood. After the closing of the industrial plants that used to occupy the area, the city can now embrace the waterfront and its splendid view of the Little Belt.

The 20,4 hectares will create space for 2800 workplaces, 1200 residences, retail, culture and public services.

When King Frederik III founded Fredericia in 1650, he had great, ambitious plans to create a pompous royal city inspired by Venice - complete with canals and a castle. Unfortunately, the king's financing of the plans went down the drain and neither castle nor canals ever saw the light of day.
Now, some 370 years later the king's plans have become inspiration for the development of the new area at the harbour and Fredericia will finally get its canals.

Development of the area will span over several years. However, there's already a lot going on. The area has been put to temporary use with initiatives such as the urban gardening project Grow Your City, where locals can rent planter boxes and grow their own fruit, flowers and vegetables. Next to Grow Your City, you can find C-byen with pop-up container shops, where you can buy anything from records, clothes and arts and crafts to food and drinks.

If you’re into sports and leisure the area also has a basketball court, a skate ramp, parkour facilities, great angling spots and an amazing view for a run or a walk with the dog.
It is also home to a range of events such as triathlon, community barbecues, veteran car shows and much more.

The development has been split into stages and the entire project is expected to be finished in about 20 years.
The first part of the canal system, Frederik’s Canal, was opened in 2016. The first residents have moved in and new building projects are in progress.

On Kanalbyen’s website you can read much more about the project.