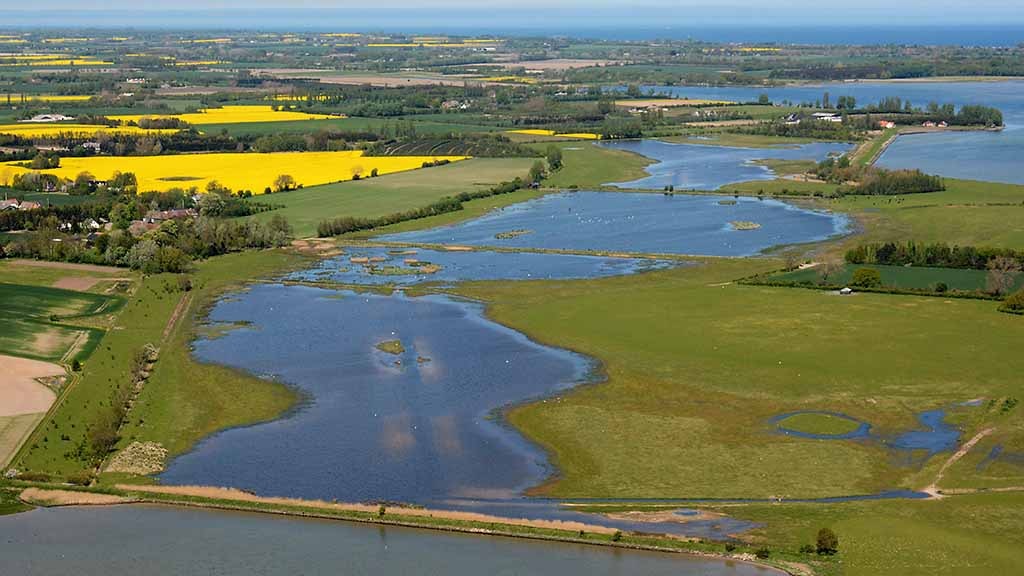 Ølundgård, Lammesø and Firtalsstranden are beautiful protected nature areas by Odense Fjord, where you can see how the land reclamation have given life to many birds and plants!

The beautiful area along Odense Fjord is a bird paradise and a nice place for excursions.

The damming of the fjord

Much of the area along the Odense Fjord was reclaimed during the 1800s. This also applies to the area by Ølundgaard and Lammesø. Dikes were built, pump turbines and pumping equipment were put up, and the former fjord became farmland. In 1921 there were five storm surges with devastating consequences, and then the dam was reinforced, and the fields were drained from 1943-46. Subsequently, however, there was no more work done on the dam - and that avenged itself on February 22, 1993, as violent storms caused the worst floods in a century. The water broke through the dam and the Odense inlet flooded all Ølundgårds old containments. The fields were pumped free of water, but the salt water had destroyed all crops that year.

The floods were used to promote a good idea: The nature foundation Aage V. Jensen Naturfond bought Ølundgård in 1997 and began to restore the wetlands. During the years, the foundation bought more and more, so the restored area now extends over 158 hectares. Several lakes and meadows have been recreated in the area, and the former islands that stood as mounds in the reclaimed landscape, have now become islands again.

Ølund, Firtalsstranden and Lammesø have become one of the Funen's most important breeding areas for wading birds as well as a resting place for many different waterfowl such as greylag goose, curlew and godwit. You can see many birds if you keep quiet and let the birds come to you.

There are parking spots, trails and two bird towers in the area where you can watch the impressive bird life. From Otterup, you can reach Ølundgård, Ølund and Lammesø by turning off towards Hessum. In Hessum, head towards Ølund. In Ølund, drive along Lammesø.