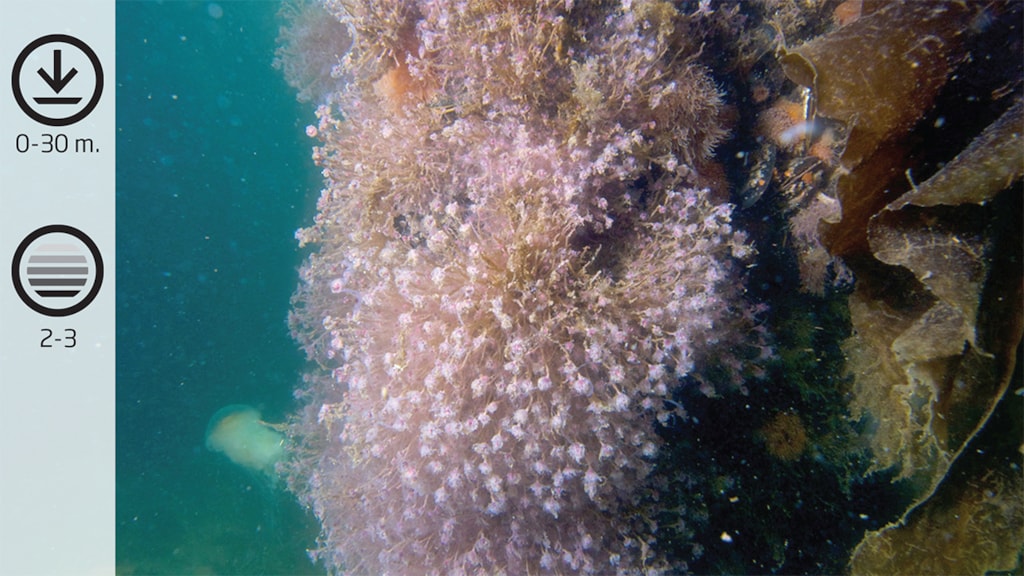 The best and most popular location in Lillebælt. Spectacular wall dive in multiple levels. A large variety of marine life and many different species of seaweed. An opportunity to experience lobster.

There is a 30-m2 shower facility with running water and enclosed outdoor and indoor showers. The shower facility is open 24 hours a day. NB. Due to environmental considerations, the use of soap is forbidden

How to find Coming from Brovejen (Road 161), turn at Galsklintvej and 400 metres further along, turn right at Søbadvej. You will find the yellow house Søbadet and Lillebælt at the end of the road.

Getting in and up the water: It is recommendable to enter the water inside the marking by two yellow buoys. This is the official diving spot marking on all Danish marine charts.
Highlights: The multiple level wall with the varying marine life.
Air filling station: You can get your airbottle refilled at Hindsgavl Camping in Middelfart (open all year round) during opening times: Hindsgavl Camping. Alternatively ask the local diving club in Middelfart, Tel.: +45 3311 1323 :Dykkerklubben Marsvinet
Best season: All year round
Dangerous areas: Avoid going too far out in the belt and please mark visibly with A-flags. Sailing close to shore occurs throughout the year.
Depth: 0-30 M.
Tide: Can be strong further out, but seldom strong close to the shore.
Level of difficulty (1-5): 2-3
Permissions: None
Facilities: Parking space and toilets (entrance from the parking space in the yellow building) NB: limited opening hours for the toilet. There is a 30-m2 shower facility with running water and enclosed outdoor and indoor showers. The shower facility is open 24 hours a day. NB. Due to environmental considerations, the use of soap is forbidden.

At the old sea bath house – Søbadet, you find one of best and most dived sites in Lillebælt. You can see the yellow building on the right side of the Old Lillebælt Bridge when driving between Jutland and Funen.

When you reach Søbadet - at the end of Søbadvej, the car can be parked outside the charming yellow wooden building, just 30 metres from the water's edge. From here there will be dived all year round. You are guaranteed to meet other divers here from Denmark as well as many Dutch and German divers. In the waters off Søbadet, there is a marked diving area - marked by, among other things, large yellow buoys year round.

The dive itself is one of the only "multiple level wall dive" in Denmark. Like most other places in Snævringen, the depth increases quickly. So a few meters from the beach, you can put on the fins and dive. You start by floating above the common eelgrass belts, which quickly changes into belts with sugarkelp, laminaria hyperborea and colonies of rocks overgrown with breadcrumb sponge; all this because of the depth.

Even before you reach the wall, you can easily have spent some air on the first 4 to 7 metres of water. The large variety of rocks, sand and large algae make the place a habitat for many different species. In winter you often many nudibranch. At 7 metres depth you reach the first level of the wall, which is about 4 metres at its highest point and below it, there is a plateau of 2-3 meters width. Further down there will be another wall and another step before it slopes down until 25 to 30 metres depth. The seabed is fairly flat and less exciting.

It is exciting and varied marine life on the wall and at the caves and the rocks at the base of the wall, which is the highlight of this dive. There are a myriad of hiding places for fish and shellfish which prefer to live in caves. The more curious fish, which can be encountered, include tadpole fish and yarells blenny. These two fish are known only to a few and they are adept at hiding in caves and crevices. A good lamp is a must when diving at Søbadet. In the summer as well as in the winter.