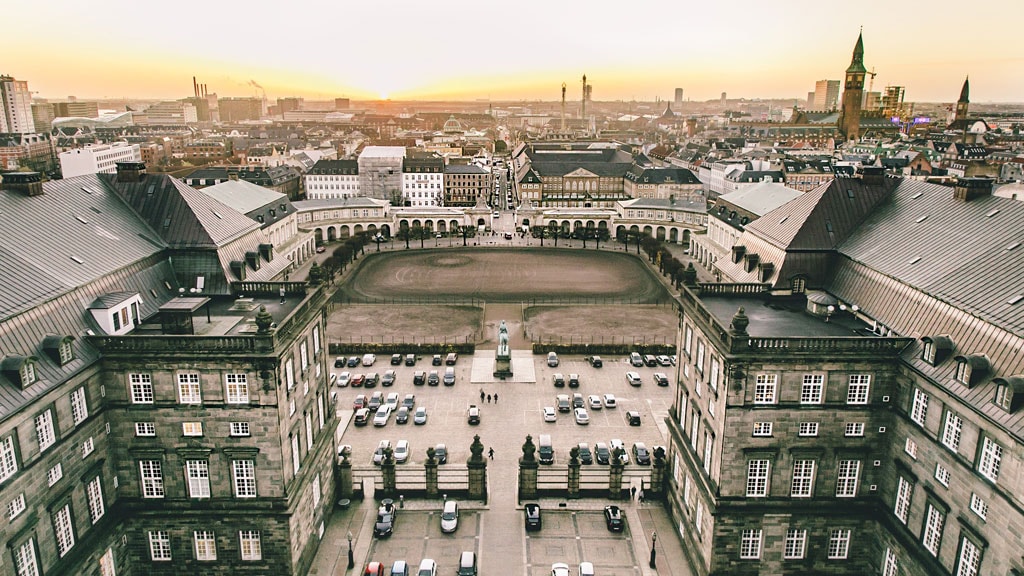 With its 106 metres, the Christiansborg Palace tower is the highest tower in Copenhagen, and it offers a magnificent view of the city's rooftops. It is free to access the tower, and if you want to add some spice to the experience, you can dine in The Tower's restaurant.

Christiansborg Palace was once the home of kings and queens, but after one of several great fires, the royal family moved to Amalienborg Palace in the late 1800's and never returned.

The Tower was constructed as part of the third, and present-day, Christiansborg Palace, which was built during 1907-1928. Like the rest of the palace, it was designed by architect Thorvald Jørgensen.

With a height of 106 metres, the tower on Christiansborg Palace is the highest tower in Copenhagen - 40 centimetres higher than the city hall tower.

Today Christiansborg, also known as Borgen, houses the Danish parliament, and in June 2014, the tower opened to the public, which means everyone can access the tower free of charge and experience the magnificent views of Copenhagen.

The King’s Gate can be reached from the Palace Square and from the Inner Courtyard (via the Marble Bridge and the Riding Ground). There is a lift from the entrance to the top of the tower. The stairs cannot be used.

There may be a queue, as there is limited space at the top.

Get a taste of Denmark in The Tower restaurant

Add some spice to your visit and taste the Danish cuisine in The Tower's restaurant, run by the company Meyers, which was founded by Claus Meyer – one of the central figures responsible for the uprising of the new Nordic cuisine.

The team from Meyers makes food with the best produce from all over Denmark. The intention is to bring traditional Danish dishes back into the limelight, but with a modern twist to make them outstanding.

Meyers also operates restaurants at The Royal Playhouse, The Royal Theatre and The Royal Opera. At The Tower, head chef Maria Junker dishes out her expertise within the field of “smørrebrød” or open-faced sandwiches. Before joining the restaurant, she was head chef of the renowned Copenhagen lunch restaurant Schønnemann.

The restaurant is open for both lunch, dinner, and a quick cup of coffee. For lunch Meyers serves up traditional Danish open-faced sandwiches with a modern touch. Dinner is served in the cosy atmosphere and the ingredients of the updated Danish classics reflect the changing seasons. Throughout the year Meyers in The Tower also offers special pastry events where you can dive into an abundance of Danish cakes.

The restaurant overlooks the royal riding yard, and the observation tower is just above the restaurant, which means that you can walk up the stairs and overlook Copenhagen before or after your meal or tea.