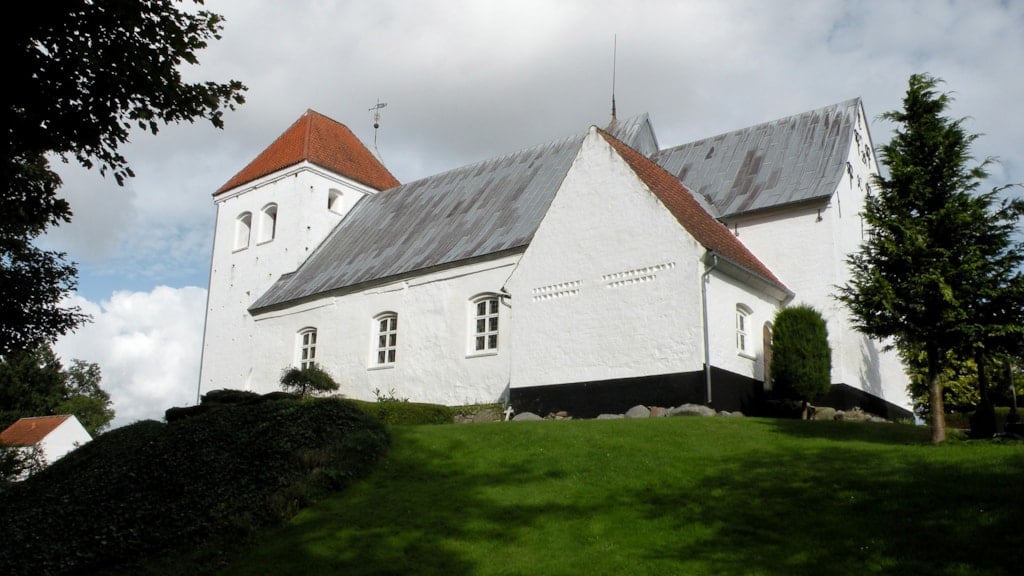 Photo: VisitHaderslev
Attractions
Churches
Vonsbæk church is dedicated to Saint Andrew. The church lies lonely near Haderslev Fjord, removed from all the villages in the parish. Here is a well-preserved crucifix from the 1400s and an unusual Romanesque baptismal font.
Adresse

Vonsbæk Church is a whitewashed church with a Romanesque core, consisting of a nave and choir. The church is built using a mix of boulders, monk stones and flint. It has three late Gothic extensions: tower, vestry and a weaponhouse with a fireplace from the renaissance.

The church is characterized by several changes during the years, including a thorough restoration in 1941. The nave has a beamed ceiling, while the choir got an immured vault. The altar is made of monastic boulders, but is covered by a wooden panel. The core of the altarpiece is a renaissance alterpiece from approximately 1600 but with newer wings and top piece. The main part is a painting of Jesus on the cross outside Jerusalem, with a sky darkened by clouds and lightning.

The church has preserved a crucifix from around 1400, while other woodcarvings are located in the Danish national museum in Copenhagen and on Gottorp Castle in Schleswig (Germany).

The baptismal font is an unusual, roman granite font, with arcades and figurines that jump out, on the bowl and heads on the foot. During the restoration in 1941, fragments from old chalk paintings, from around 1650, were uncovered, one of which was put on a canvas which now hangs on the south side of the nave. The pulpit is a piece from the renaissance period around 1600 A.D. The organ was made by Marcussen & Søn in Aabenraa.

The church is open whenever employees are present at the cemetery, usually Tuesday-Friday from 8am to 3 pm. Otherwise, visits can be arranged by calling Digger Nanna Dittfeld at tlf. +45 21 46 77 71.