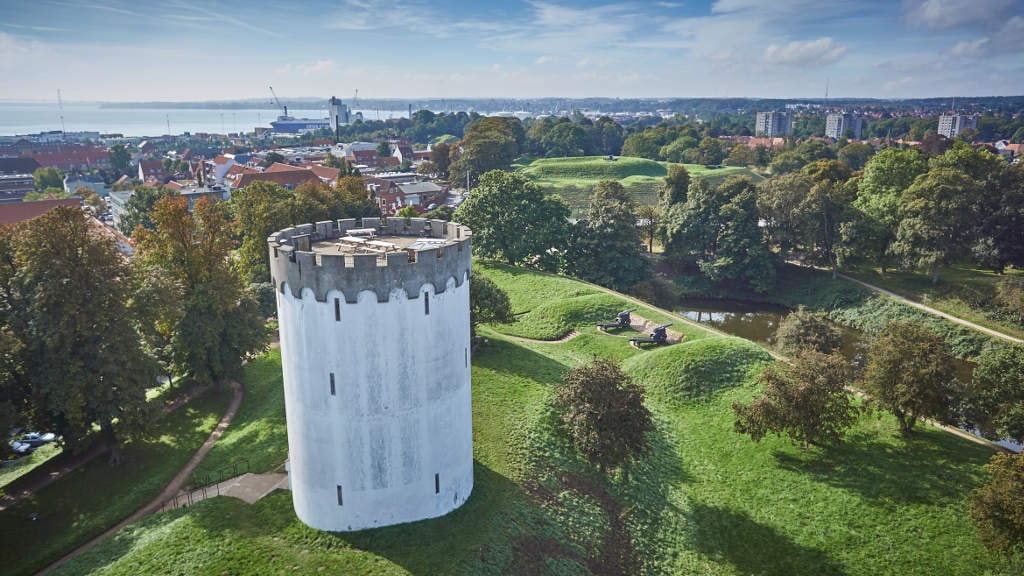 The White Water Tower is built on Prince George's bastion on the ramparts of Fredericia.

A key to the tower can be acquired at Fredericia Library. The price for renting a key is 50 dkk. There is a limited numbers of keys, so availability is not guaranteed. If you want to be sure you can pre-book a key. Otherwise, simply drop by the library during manned opening hours and ask. (Be aware that while the library opens at 8 a.m. Mon-Fri, staff is only present from 10 a.m.)

Note: There may be several groups at the water tower at the same time.

There are 81 steps leading to the top which is approximately 44 metres above sea level. The tower itself is 16 metres high.

The tower was inaugurated on January 2nd 1909 as replacement for a reservoir from 1889. The exemption for the construction of a municipal water tower on the military fortification was given because the fortress was closed down in 1909. Up until that point it had been forbidden to construct buildings or church towers, which could be seen from outside the ramparts, as these could be focal points for enemy forces.

The tower was placed on top of quite soft, moist and non-uniform soil material put together in the years 1863-64. The tower was therefore constructed with reinforced concrete. The appearance of the tower was designed so that it corresponded with the surroundings and the military history of the place.
The price for the whole lot when it was built in 1909 was abourt 24.500 dkk. The water tower originally contained about 445,000 litres of water. The function of water tower ceased in 1994.

The water tower is designed by the architect Gundlach-Petersen (1868-1960), who also designed Danmarks Port (Denmark's Gate) and Nørreport (North Gate) in Fredericia.
The interior decoration of the tower is made by Søren Kjær Hausgaard and symbolises the waters flow from ground to consumer.