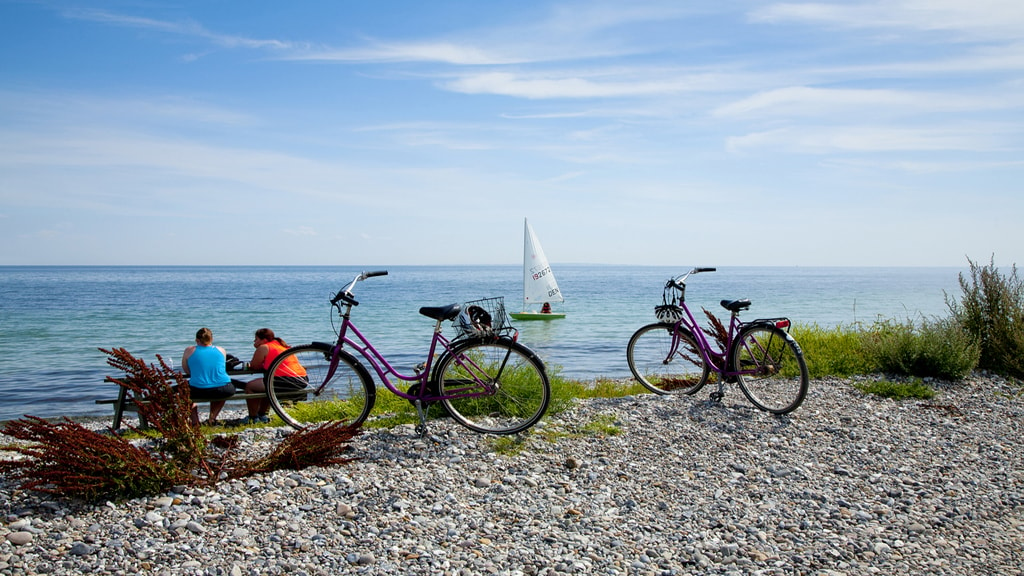 Bikeroute - The Middle of the Island

See the route and map on Endomondo

Start by visiting a couple of the Tranebjerg’s highlights.

The medieval church contains several beautiful frescoes and is considered to have the tallest village church tower in the entire country. The large barn near the church was built in the late Middle Ages and was used to store the grain that farmers were obliged to pay as taxes. The barn was later used to store ammunition during the English Wars in 1800-1814 and for storing illegal weapons during WW2.

Samsø Museumsgård (Samsø Museum Farm) is a copy of an old Nordby farm and contains a rich collection of ancient objects and peasantry artefacts. All summer long, the farm and the yard host many different activities such as folk music concerts, sing-along evenings and a “living museum” – where participants weave, spin and lace just like the old days.

In the welcome centre you can get a sense of Samsø’s history and cultural landscape so that you are ready for your upcoming trips around the island.

From the top of the water tower on the Møllebakken hill in the middle of town there is a great view of large parts of the southern island. Children can enjoy themselves on the new tarzan track.

Turn left onto the road to Langemark and Besser, just before Anton Rosens Hus (Anton Rosen’s House) with the beautiful fountain.

On your right after Langemark, you will see a memorial mound for farmer Mikkel Søren Holm, 2.6.1854-21.4.1915. Mikkel Holm has become a role model – not just for the farmers of Samsø, but for those across Denmark; he was the president of Samsø Landboforening (Samsø Farming Association) from 1886 and a member of the farming commission in 1894.

In Langemark, make a left turn towards Torup and from Torup head to Østerby. From Østerby you will be able to see Besser Church. Østerby itself is a good example of what a village looked like in the olden days.

You are now riding across the crossroads towards Besser (Søholmvej). At the entrance to Besser, the pretty old vicarage from 1750 can be seen. The rectory was used as a teacher’s college where the island’s teachers received their training. After the rectory’s garden, make a left on Skolegade. The old preschool with its white walls and red tile roof is located where the road turns to the right. It was originally founded as a “greveskole” (Count School) in 1728 and served as a preschool until 1970.

Further ahead at Hovedgaden, continue left through the town passing the ancient grocery store where you can still buy refreshments today. Continue past the community hall (note the inscription on the gable). Turn sharply to your right onto a small road called Kærvej. Along the way, you will pass the dirt road that leads to the observation tower, which was built on the foundations of a mill that burned down during the filming of a silent movie in 1913. From the tower you have a good view of Stavns Fjord and can see all the way to Zealand. If you continue along the dirt road (only possible by bicycle or on foot), you will get to the beach at Besser Strand where you can have a swim. Continue on Kærvej left of the oblong village pond till you reach the main street, Besser Hovedgade.

From here, the trip continues over Sildeballe to Besser Rev. From the car park near the base of the reef, you can take a nice walk to the tip passing over the hill called Hønsepold. From here you have a great view of a large part of the fjord.

Farther out on the reef, an entrenchment from the English Wars is located. From here, it is not far to the tip where you can look out over the narrow but stormy strait and see the island of Kyholm.

Besser Rev is open to the public all year around, except in the bird breeding season from April 1 to July 15. With its 5 kilometres, the reef is the country’s longest stone reef above sea level.

Back at Besser Præstegard (Besser Rectory) you take the road to Alstrup. When approaching Alstrup, you will see the fields framed by hedgerows. The sandy soil here is ideal for cultivating new potatoes. In Alstrup, take the road towards Toftebjerg. Drive slowly and take a peak through the gates to see the old farms.

Follow the sign towards Nordby, and observe the two hills known as Store Vorbjerg and Lille Vorbjerg. In the Stone Age these were islands but they later served as points of support for the land formation that connected the northern part of the island with the southern part.

Follow the island’s main road, popularly known as Havvejen (The Sea Road), towards Tranebjerg, where you will pass the cement factory. To the left, the slopes start rising. This is the Stone Age coastline that was lined with dunes which are now overgrown with scrub. In other words, the road you are driving on has been built on the elevated seabed.

Until around 1800 there used to be a forest stretching to Østerby behind the dunes – an area which is now occupied by fields. That’s why the area is called Gammelskov (Old Forest). The beach here in Sælvigbugten (Sælvig Bay) is family friendly.

Up until the middle of the 19th century, Onsbjerg was the most important town on Samsø, and was in fact its capital.

It is named after the nearby hill Dyret, which was originally called Odinsbjerg. Dyret is 51 metres tall and is the highest point on southern Samsø. Around the centre of town, turn right towards Tanderup. You will pass by Onsbjerg Church, which is also worth a visit.

Heading towards Tanderup you will pass Dyret. During WW2 the Germans kept a lookout on the hill, but otherwise Dyret has mainly been a rallying point for large meetings of local residents. You can access the hilltop from the roads on either side, east and west.

At the village pond turn sharply left towards Tranebjerg via Vesterholmsvej. From the hill – which is locally known as “the Alps” – you can see the final destination of you trip: Tranebjerg.