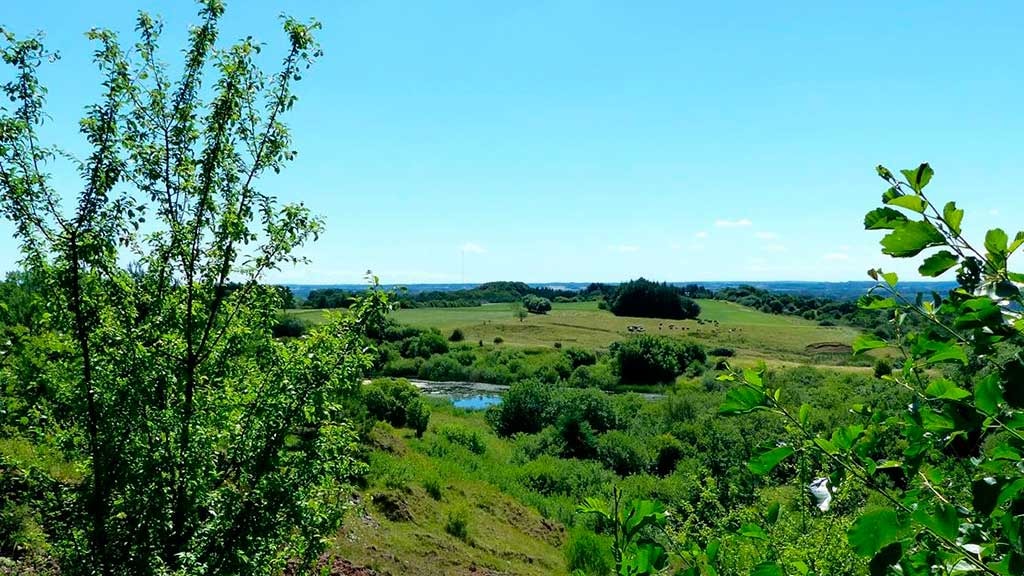 Photo: Randers Kommune
Activities
Tour suggestions
There are actually no mountains in Denmark compared to the mountain landscapes in our neighboring countries, but nevertheless cyclists who drive around Randers can get their case. The hilly landscape offers good challenges.
Adresse

See the route on a map

Worth knowing about the route

Through the hills around Randers

There are no actual mountains in Denmark although we have Himmelbjerget (“The Mountain of Heaven”). Compared with the mountainous landscapes of our neighbours, the 147 metres of Himmelbjerget do not look like very much. Still, cyclists touring the area in and around Randers have a task ahead of them here. The hilly landscape offers several challenges, and this route gives a taste of the height differences one can experience on this route in the area south of the town. For example, when one rides from Randers along Tebbestrupvej, one must climb to a height of 54 metres, on Laurbjerg Bakken one must overcome an ascent of 83 metres, and on Houlbjergvej south of Langå the climb is even 94 metres.

The manor Frisenvold has been known since 1310, but the current main building dates back to the 1800s. For centuries, the manor had the fishing rights to salmon in the river Gudenåen, and Frisenvold salmon weir was the largest of its kind along the Gudenå. Today, the excellent possibilities of salmon fishing in the river attract anglers from most of the world.

Langå originates as a railway town in connection with the construction of the railway from Aarhus to Randers in 1862 as well as the branch line from Langå to Viborg in 1863. On Novermber 17, 1943, the Danish resistance, blew up the railway bridges near Langå. This action echoed throughout Europe and was the most important example of railway sabotage during the German occupation of Denmark, 1940-45, as it stopped all train traffic on the north-south going Jutlandic railway for 12 days.

The forest Langå Egeskov consists of three beautiful natural areas, namely a 200-year-old oak wood, a new stand of oaks in the northern end, and a broad stretch of meadow along the river Gudenåen. The old oakwood with the thick and curved trunks is a unique example of the woods that formerly covered vast areas of Denmark. With 6 stones, Langå is actually the parish in Denmark where the most rune stones from the Viking Age have been found (read more about Rune stones and other ancient monuments here). However, four of them have disappeared; they have probably been used as building materials. One of the six run stones is exhibited at Museum Østjylland in Randers, while the last is located at the cemetery in Langå. It dates back to the period 970-1020, and the inscription on the stone shows that it was raised by a Viking in memory of his brother, who was a respected farmer.

Laurbjerg also became connected to the railway on the stretch between Aarhus and Randers in 1862, and the village even became a railway junction when the first stage from Laurbjerg to Silkeborg of the “diagonal railway” Randers-Esbjerg was constructed in 1908 (later closed down in 1971).

The Granslev church is a typical Romanesque village church where the nave and the chancel are constructed from granite ashlar blocks. The church is characterized by its being a manor church to the nearby Bidstrup Gods, and in 1766 it was modified by the owner of Bidstrup, Hans Henrik de Lichtenberg. It was he who had the tower with the unusual onion dome erected. The church is known for its glockenspiel, which can be heard each day at 7, 12, 17, and 22.

Lyngå Church is also a Romanesque church from the second half of the 1100s. The tower was added in the late 1400s.

The little church in Lerbjerg, which only consists of a nave and a chancel, is also from the Romanesque period. In Lerbjerg you will also find Retroworld, which is a B&B where you travel back to 1970's in both style and mind.

The little lead-roofed, towerless church was built in the 1200s. It originally consisted of a nave and a chancel, but a porch was added in the late Middle Ages, possibly intended as the beginning of a tower.

The viewpoint "Lysnet" offers a gorgeuos view of Lilleåen and with its 131 m is Denmark's 9th highest point.