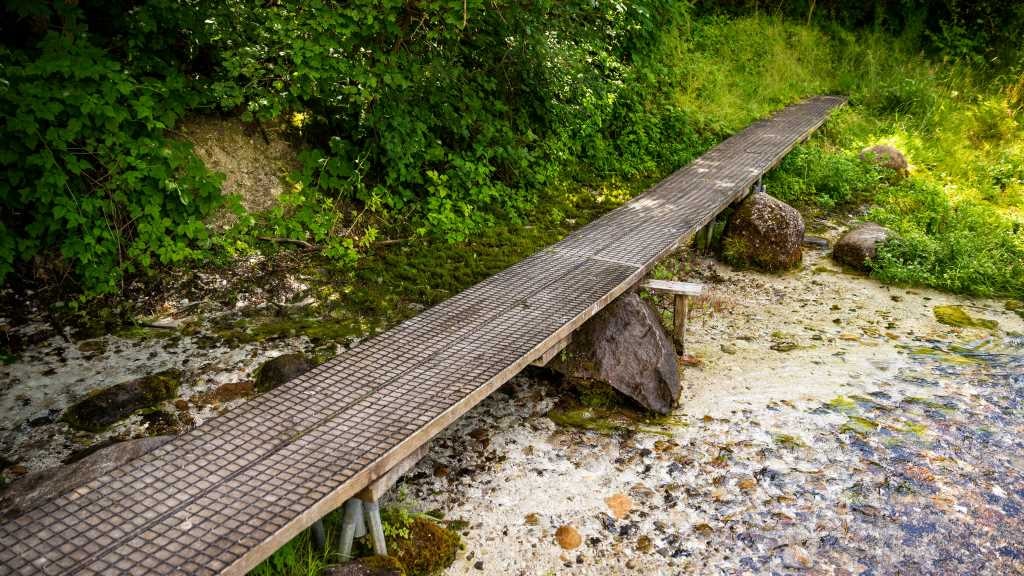 The spring is situated northwest of Nørreskov, and can only be reach by foot. A good place to start your trip is from the parking area situated halfway along Rebild Kirkevej. You can also paddle in canoe along the river, Lindenborg Å, to the spring. Please note that it is not permitted to paddle from the stream into the spring source. It is possible to berth at the river bank near the outlet.

Lille Blåkilde is, with its approximately 90 litres per second, one of the largest springs in the Rold Forest area, and it drains an area of ​​10-12 square kilometres. The spring is a fracture spring. The water emerges through several small cracks in the limestone, and after about 70 metres discharges into Lindenborg Å.

The chalk is clearly visible under the trees on the right side of the steps up from Lille Blåkilde. On the left side of the steps, a thin layer of top soil covers the limestone. This is a rare natural habitat called chalk grassland. There are some lime-loving plants on the slope – among others, primrose, cowslip, sanicula, and the early-purple orchid. In addition, there is evidence to testify that the slope was a woodland until recent times – these include Solomon's seal and baneberry.

The spring contains a number of the common, pure water species among caddisflies, stoneflies and mayflies. But the most famous species in the spring is the caddisfly Apatania muliebris, which can be dated back the time after the ice age. It is due to the constant water temperature at 7.3°C that it still exists. At the outlet into Lindenborg Å, in the month of May, you can often find many small eel-like fish stuck to the bottom, called the brook lamprey or nine-eyed eels.

A few hundred meters south of the spring, the remains of ancient roads, a row of stones, and stone circles can be found. Above the spring is a site where dolmens from the Stone Age, and the burial mounds of the Bronze Age, are located closest in Denmark.