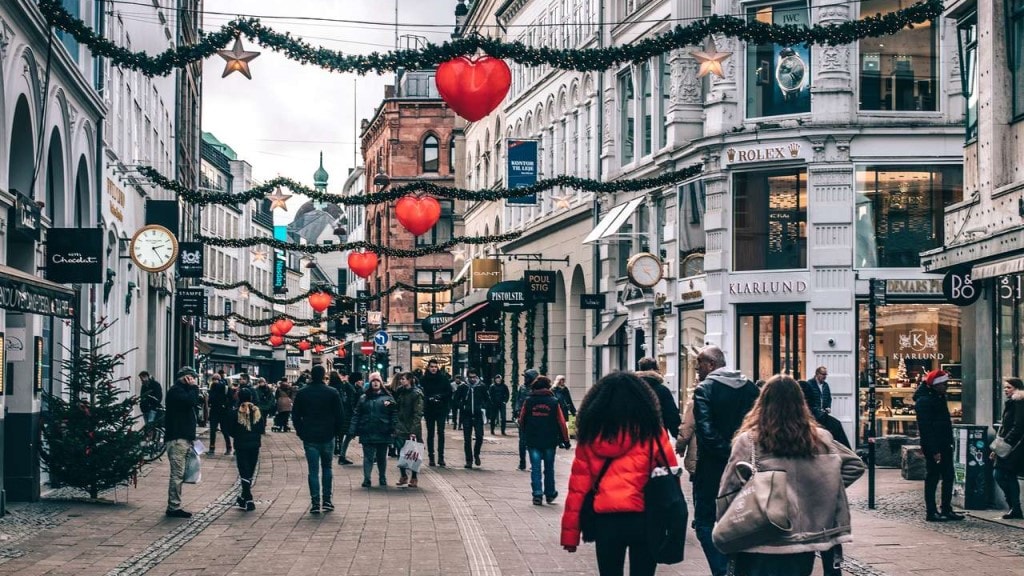 Copenhagen's largest shopping area is centered around Strøget in the heart of the city.

Strøget is one of Europe's longest pedestrian streets with a wealth of shops, from budget-friendly chains to some of the world's most expensive brands. The stretch is 1.1 kilometers long and runs from City Hall Square (Rådhuspladsen) to Kongens Nytorv.

Strøget is most famous for shopping. Big international brands like Prada, Max Mara, Louis Vuitton, Mulberry, Hermès and Boss are represented at the end of the street facing up to Kongens Nytorv.

If your budget is more limited, you can continue along Strøget down towards City Hall Square, where you find shops like H&M, Vero Moda, Weekday and Zara.

Read our big guide to shopping on Strøget

However, Strøget is not just shopping. Look up and down the side streets during your shopping spree, and you will see several of Copenhagen's beautiful sights and attractions, such as Helligåndskirken, Church of Our Lady (Vor Frue Kirke), where Crown Prince Frederik and Crown Princess Mary were married, behind Gammeltorv Square, the court house at Nytorv Square and the Stork Fountain (Storkespringvandet) at Amagertorv Square.

From Amagertorv you can also see across the canal to Christiansborg Palace, where the parliament sits. And do not forget City Hall Square (Rådhuspladsen) with Copenhagen City Hall Tower and the beautiful Kongens Nytorv square with The Royal Danish Theatre and Nyhavn in the other end of Strøget.

Strøget is a popular hangout for the city's street performers. Especially at Amagertorv Square you can often see performances by acrobats, magicians and musicians.

In the end of the street adjacent to City Hall Square you should be wary of con artists who make money on games in which they ask passers-by to guess the whereabouts of a ball under one of three cups.